A Farewell to the Frontman

This Saturday night marks the end of an era for one of the area’s best talents. Rob Creek has been on the Chicago music scene since the 80’s fronting original rock band Valentino (later renamed Slam St Joan). Belting out songs in a style similar to that of LA Guns, Cinderella and Bulletboys, Creek’s versatility has undoubtedly been a contributing factor to his staying power.

Few vocalists can shred gnarly high notes and still have the capability to float down delicious runs such as those found in Chris Stapleton’s Tennessee Whiskey.

And that only begins to tell the story on this talented front man. Whether fronting Valentino, Slam St Joan or GOOROOS, it won’t take long to feel his energy and charisma pouring out of him and into the crowd. George Karl, GOOROOS guitarist and Rob’s “Toxic Twin” has been with Rob since the beginning. “When Valentino started, we had a singer who was good... plenty capable of the music we were writing. But, things started to fall apart a bit, and we brought Rob in to jam with us. He didn’t know any of our songs (since they were all original), but he said ‘No big deal, I’ll just lay something over what you play’. And MAN DID HE. The melody lines he chose were even BETTER than the original way we wrote our songs. I knew immediately… he is the REAL deal. There are other guys out there that are perfect vocalists, but nothing compares to Rob. I’ve never been on stage with anyone that’s better. People buy into him, because it’s genuine. Everything he puts on that stage is him… genuine. I am going to miss this guy like crazy. But maybe we’ll get lucky and he’ll come back when he misses it!”

Dave Tanis (original GOOROOS drummer and founding member) recalls the launch of GOOROOS: “George and I had started the band and were looking for the right singer that would launch this GOOROOS concept. We had been through a few auditions and had not been feeling great about our choices. George said “Let me reach out to my Old singer from the 80’s”. I said “Really? We are not doing 80’s rock…” We brought Rob out to jam and he had learned 3 songs. We were about 30 seconds into the first song and I looked at George and gave him the eye… like… HOLY CRAP! This is it! We then went on to have the best 5 years of my musical career. Rob has IT. There is no one like him. I am so proud to have been in this band with the most talented line up ever! "

Tesa Kay, GOOROOS vocalist, first met Rob just over four years ago. “I was brought on as a background singer when the band was just getting started. The first show I played with these guys was at Durty Nellies in Palatine. There is a green room for the artists to hang in before a show. So I found my way to it and the guys were already in the room warming up. I walked in just as Rob starting to sing a few warm up runs. My jaw dropped…. and this was just the warm ups! I immediately knew this guy was something special. He was so good, it was almost intimidating to sing with him. I took a deep breath, and started to harmonize…. and it was pure magic. It is impossible to convey to anyone what we have together when we sing... I am going to miss everything about him.”

Original key-man Jeff Neuschaefer shares “Rob is generous, an entrepreneur, a survivor, a kayaker, and a rock star. Performing on stage with this man has been some of the best memories I’ve had playing music. I’ve got immense respect for this guy and wish him many happy days ahead as he travels the nation.”

After walking off the stage for (what we hope won’t be) the last time, Rob will be traveling the country in his Airstream with his beautiful wife Stacey. Happy travels ahead for sure… but will the Valen-Slam-Roo make a come back? Only time will tell…

Check back soon
Once posts are published, you’ll see them here.

A Farewell to the Frontman

GOOROOS join forces with 4 other bands at Broken Oar benefit on 10/21. 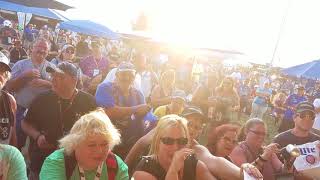 NASCAR'S Rusty Wallace gets the crowd fired up for GOOROOS